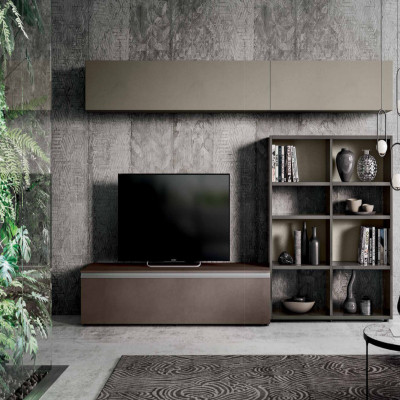 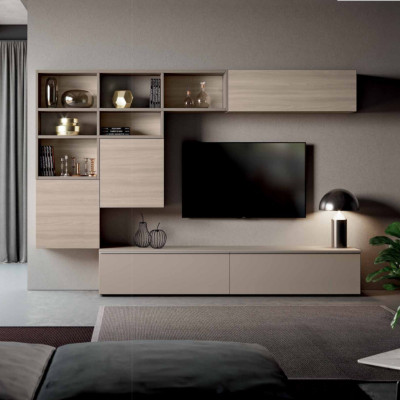 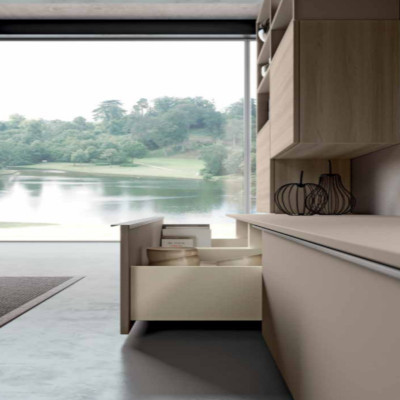 A particular system of hangers. It allows wall fixing, to have the possibility of having the bookcases suspended at the desired height, as well as on the ground. Living room composition. Hinged wall unit, Tilting wall unit: nature elm. Hanging bookcase: colored mink. Bases: smooth colored mink. Measurements: L300xP53xH196 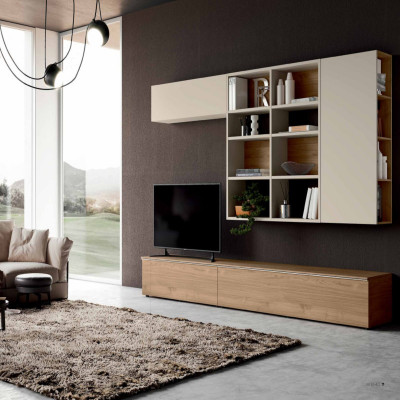 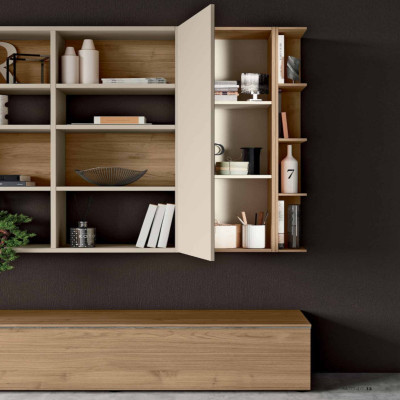 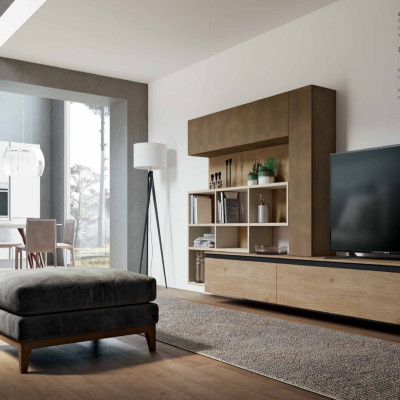 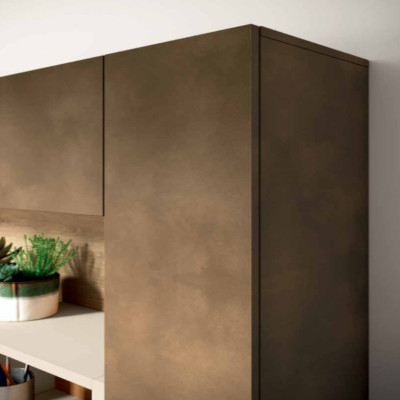 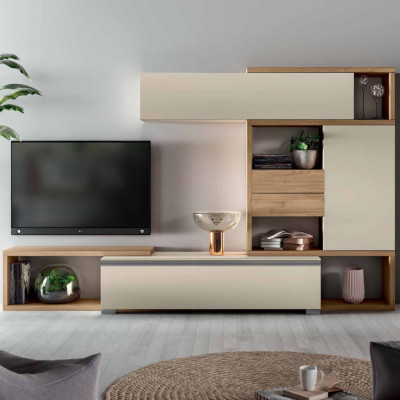 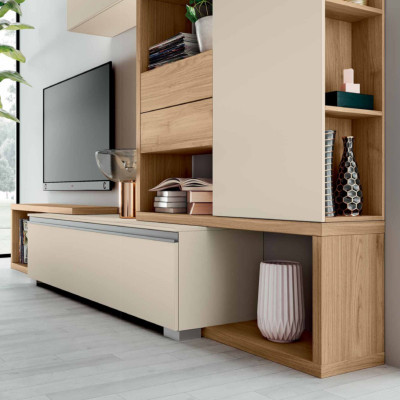 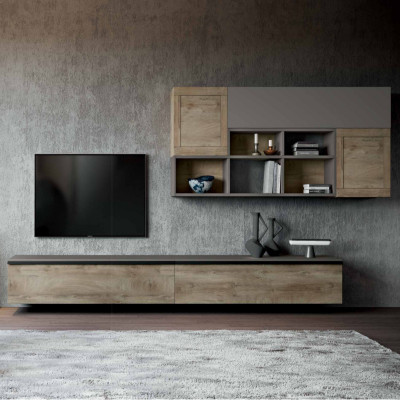 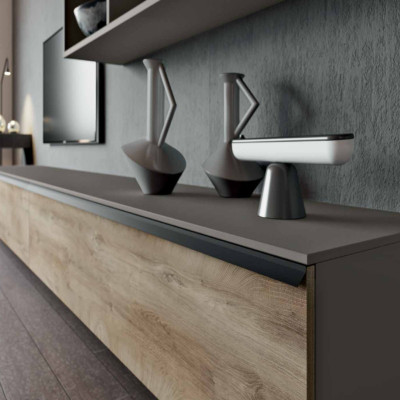 Available in all the essences of the program, you can choose between the black or satin finish to best match the handle to the color of the composition of your living room. Living room composition. Hinged wall units and base: Oak. Tilting wall unit and wall bookcase: Ash gray. Backrest: Oak. Measurements: L420xP51xH180. 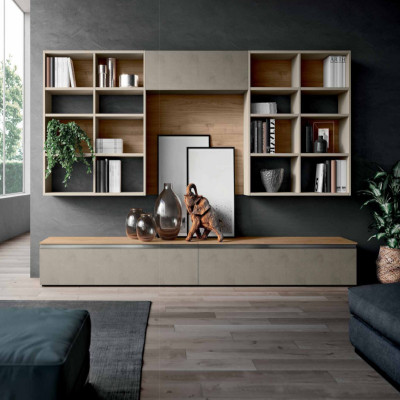 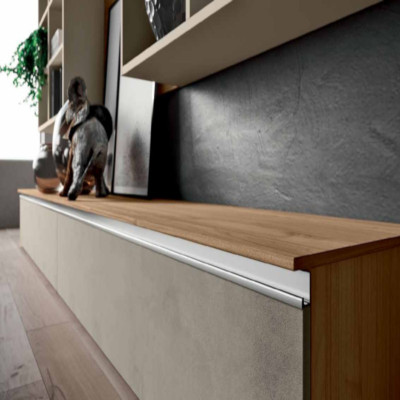 The new Gemini handle can be mounted on modules of 60, 90, 120 and 180. Linear and design, it is available in black or satin. Living room composition. Bookcase and structure: Matt barley. Backrest: Blond walnut. Bases and wall unit: Clay, blond walnut. Measurements: L360xP51xH212. 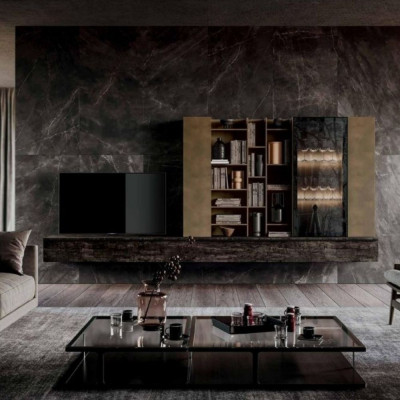 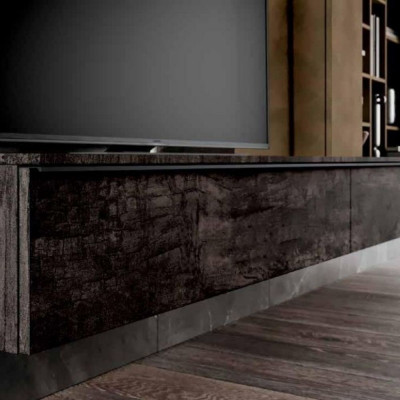 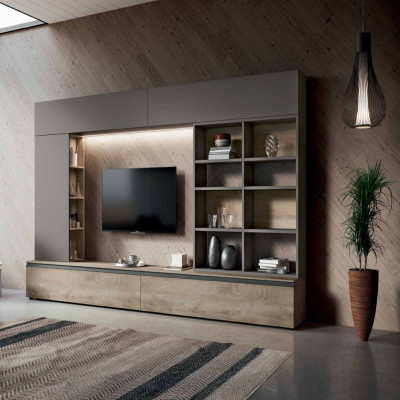 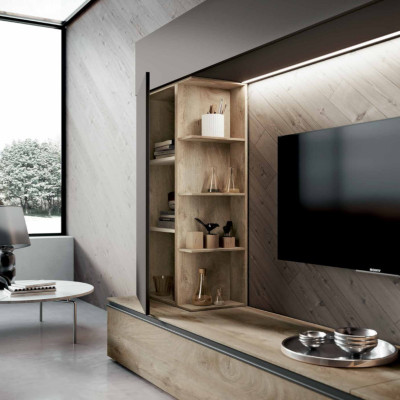 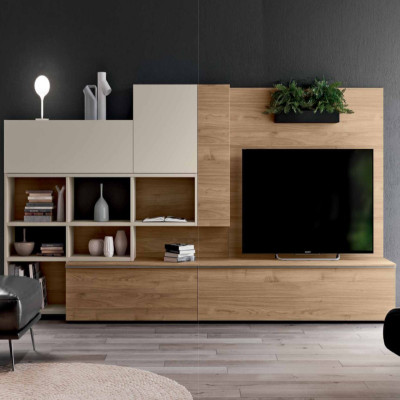 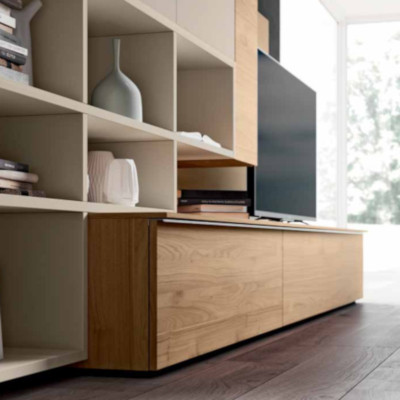 The shades of the new blond walnut finish transform the living area into a lively and vibrant environment, where you can spend pleasant moments of relaxation in the company of family and friends. Living room composition. Bookcase, flap wall unit: Barley. Hinged wall unit, Boiserie, Base, Backrest: Blond walnut. Measurements: L360xP53xH159. 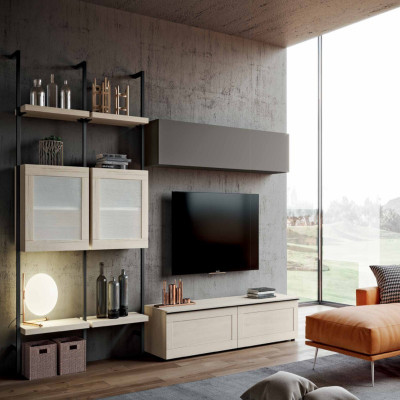 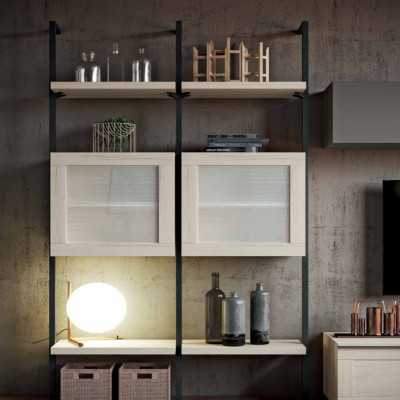 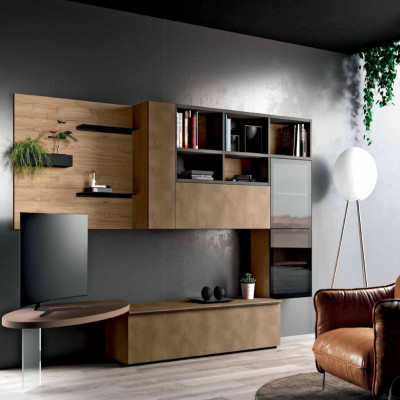 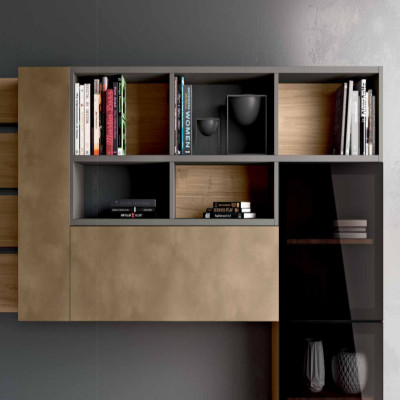 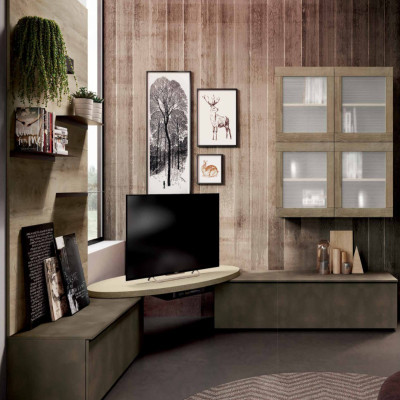 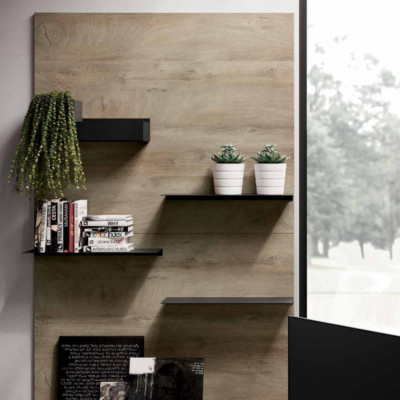 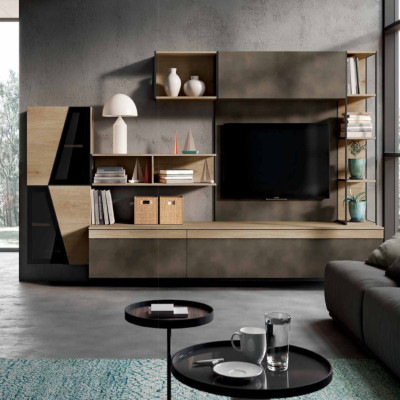 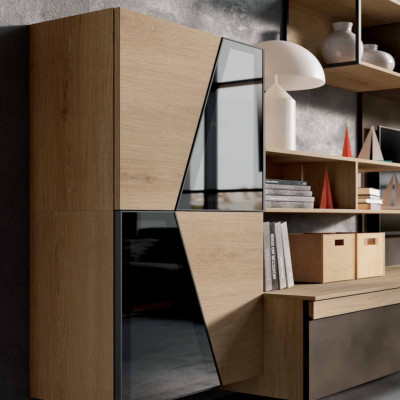 The way of understanding one's home and living in the rooms today is constantly evolving, an evolution that is always linked to the eras that change over time.
Until recent times the apartments were designed in such a way that each room had its own specific role in daily life in a certain sense "detached" from how everyday life is lived today where the modern living room has become the " symbolic place "of the house, it could not be otherwise ....

The contingent needs of our time have radically changed the way we conceive environments, modern living rooms are nowadays the place where many purposes are added and concentrated such as: reading, conversing, having lunch, playing, working, watching TV, resting (relaxation) , where friends stay and so on ...

With technology that makes giant steps with the advent of computers and the internet, everything has speeded up and this has extended to all sectors such as: the architecture of the apartments (increasingly smaller) and consequently in the modern living room furniture in the sense that, having changed the ways of living everyday life, the typical "formalities" of "luxurious" homes where every environment had, so to speak, a function of its own, fell away.

For example, the living room of a house had a different function from the living room (an environment where the furnishings had to represent luxury and wealth); therefore, entrances, dining rooms, corridors and kitchenettes disappear to make room for the concept of " open space " which joins the dining room, living room, study and kitchen into a single environment, everything merges and concentrates in a single entity -place where there are no longer "barriers" or subdivisions between public and private.

Modern living room: suitable for all space needs, even the smallest one

With the tendency to reduce the space of the rooms in the apartments, the architects have solved the problem by eliminating most of the walls and integrating part of the available spaces of the house in two environments: the living area and the sleeping area .

The fusion of these environments: the living room, the hall, the bedroom , the balcony , the veranda or the garden , must be in harmony and symbiosis with each other in such a way that the much desired home is pleasant in all environments. daily occasions.

Comfort, practicality and design in the modern living room

With the fusion of the rooms of the house, the modern living room, as we have said, becomes the symbolic place of the house, but this implies a total revisitation and a targeted and accurate study of the details in all aspects if you want to obtain the maximum comfort and practicality . and of design especially in small apartments; therefore, in order not to find oneself as a result of unpleasant surprises and consequently to avoid incurring unexpected costs, a preventive design of spaces and furnishings becomes of great importance.

How to furnish a modern living room: the basic principles

Here is a list of useful rules that should be carefully considered when decorating the modern living room:

Maximize the result by minimizing obstacles

It is a good rule not to focus only on the layout of the house, but to personally make a survey trying to immediately imagine (as far as possible) the location of the individual functional spaces that will characterize the living room.
An analysis that ultimately simply aims to facilitate the task of those who are about to build, renovate or even just furnish a living room.
Subsequently, the needs and expectations of those who will live there must also be defined, in order to satisfy all the requests for comfort, functionality, design of the project of a modern living room.

As we have said, the modern living room is undoubtedly the most "multifunctional" room in the house , which is why it is important to define the needs and habits of those who will live in the house.
The most frequent mistake is to start from a somewhat vague furnishing idea that we know we like and then adapt later in its use.

In other words, it is necessary to understand, first of all asking a series of questions, about who will live in that particular living room and what their specific needs will be.
For example, you will have to ask yourself: if the house has a separate kitchen, or if the entrance is part of the modern modular living room, or which area to value more depending on the function that I will most want to give: whether to host or to work, and so on ...